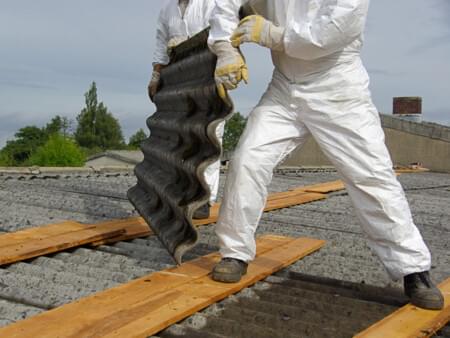 Time and again, contractors and do-it-yourselfers have to answer to the courts for failing to comply with work and environmental protection measures in connection with asbestos.

Just recently, police officers on patrol in Marktoberdorf (Allgäu) observed construction workers removing asbestos-containing Eternit exterior cladding from a building without taking the necessary protective measures. As a result, a criminal investigation was initiated against the contractor.

In another recent case, a former building contractor was sentenced by the Singen District Court to a fine of 36,000 euros and two years' probation. Although there was a suspicion of asbestos according to a previously obtained expert opinion, the construction company had not taken all protective precautions for handling asbestos when dismantling roof panels. Although the workers wore protective clothing, according to witness testimony there was no separate break area, no suitable vacuum cleaner, and no proper cordoning off of the construction site. In addition, there were a disproportionate number of broken roof panels lying around the site.

While some handymen and do-it-yourselfers handle asbestos improperly out of ignorance or misjudge the dangerous situation, there are also scammers who want to pressure homeowners and residents into asbestos removal. The police of Middle Franconia warn against perpetrators acting nationwide who pretend to be craftsmen. Frequently, they proceed as follows:

The police, therefore, advise never to let unannounced craftsmen into the house or apartment. Contracts should never be signed under time pressure and such handicraft achievements should never be paid in advance if the enterprises cannot present proper disposal documents. If in doubt, those affected should contact the police and file a complaint.

Asbestos hazard not visible to the naked eye

The fact that old corrugated roofing sheets (Eternit sheets) contain asbestos and require special safety precautions during dismantling is now known to many. However, asbestos was still used in numerous other building materials until the early 1990s and can be found in a wide variety of places in houses built or renovated before the 1993 asbestos ban (see info graphic: Where is asbestos hiding in the house?). Since the tiny fibers can only be seen under a microscope, it is often not obvious to the layperson, or even to experienced craftsmen, which building materials are contaminated with asbestos and which are not. To protect yourself and others from health hazards and high penalties, we always recommend: first have it tested for asbestos, then renovate!

Congratulations to our partner agency for the Google badge

Blackbit was awarded the "Google Premium Partner" badge. This officially places the company among the 3% of the best Google agencies in Germany. We are not too surprised, but pleased, because we can only confirm: The Blackbit team knows what it's doing! ... read more

On November 11 and 12, 2021, the 30th Forum Asbestos took place at the Haus der Technik, Essen. After we were only able to participate in the online offerings of the conference in 2020, we were again on site in person at the 30th Forum. Here is a summary of our impressions of the event. ... read more

On December 7, 2021, the vdu office in Hanover will offer a training course on "Basic and Refresher Training on Drinking Water Sampling". As a member of the Association of German Testing Laboratories e.V. (vdu), we are pleased to point out this interesting event. ... read more