Approximately 350 lectures were given from various engineering and environmental geological fields, mostly by American but also by a considerable number of international geoscientists.
In addition to symposia on dam construction, hydrogeology & groundwater, earthquakes & land movement, environmental pollution, geological modelling and other topics, there was also a symposium on 'Naturally Occurring Asbestos, NOA'.statt.

This was held in the form of a key note lecture by Prof. Dr. Alessandro F. Gualtieri (University of Modena, Italy) with a general overview on the subject of mineral fibres, a panel discussion, 34 individual lectures on the subject of naturally occurring asbestos and an excursion to a recently completed dam project (Calaveras Dam Replacement Project) in the midst of asbestos-containing rocks.

At the invitation of Mark Bailey (Asbestos TEM Laboratories Inc., Berkeley, CA, USA), Chairman of the NOA Symposium, our colleague Dr. Stefan Pierdzig participated as a speaker with a lecture (Regulations concerning Naturally Occuring Asbestos (NOA) in Germany - Testing Procedures for Asbestos) and as a participant of the panel discussion.

Prof. Gualtieri presents the state of multidisciplinary research in the field of asbestos and mineral fibres. He points to the harmful biochemical interactions of mineral fibres with the human body, which have so far been poorly understood.

He calls for a closer collaboration between the mineralogist / crystallographer who looks at the asbestos fibre and the biochemist / toxicologist / doctor on the other hand who takes the perspective of the organism interacting with the fibre.

He also points out that there are a number of other mineral fibres that have not yet been regulated, from which there are reasonable suspicions of their carcinogenic activity in the human body.

Panel discussion with international guests of the symposium

After a presentation of the participants and description of their activities in connection with asbestos, there was an exchange (unfortunately with far too little time) on the following topics 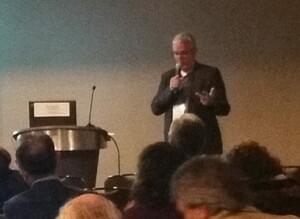 The following topics were dealt with in the lecture:

Abstract of the lecture
Regulations concerning Naturally Occuring Asbestos (NOA) in Germany - Testing Procedures for Asbestos
Pierdzig, Stefan, CRB Analysis Service GmbH, Germany, pierdzig@crb-gmbh.de
In Germany like in other countries potentially asbestos containing rocks are used as raw materials for a number of engineering appliances. These rocks are ultrabasites (dunite, harzburgite), igneous rocks (basalt, gabbro, norite) and metasomatic or metamorphic rocks like talcum, greenschist, amphibolite. Based on the German ‘Gefahrstoffverordung’ (Ordinance on hazardous substances) there exist regulatory statutes for the operation with those rocks, resultant composites and products. The authorities state that in Germany no natural rocks exist with more than 0.1 mass-% of one of the six asbestos minerals (chrysotile, amosite, crocidolite, tremolite, actinolite, anthophyllite). But it is well known that there are rocks with a high modal concentration of these minerals with a non-asbestiform, columnar to prismatic habitus. Under mechanical stress during handling, due to their high cleavability, they can lead to fibrous cleavage fragments, which conform to the WHO-Fibre definition. In view of this fact the regulations changed in 2007: any fibrous asbestos particles, no matter if  NOA or of cleavage origin, are surveyed for endangering evaluation or during handling of these rocks. If the WHO fibre concentration is < 0.1 mass-%, rocks and products can be used and reused under protective measures. At concentrations > 0.1 mass-%, the material is considered hazardous waste and has to be disposed of. These regulations apply to a lot of industrial sectors as exploitation and processing of rocks, their usage in road building and track construction as well as its recycling. Analysis (by SEM/EDS) of asbestos concentration of rocks, gravels or dusts is carried out in the grainsize fraction < 100 µm, produced by sieving or grinding. The results represent a worst case examination of the situation during mechanical treatment of these materials. Workplace monitoring is done by air sampling to survey an exposition limit of 10.000 fibres m-3 of air.

The water reservoir of the Calaveras Dam has served the water supply of San Francisco for more than 100 years. After the old dam (top right in the picture) became unstable due to tectonic earth movements, a new dam was built in the last 7 years (middle in the picture above).
Several million tons of rock were moved for this purpose, partly metamorphic rocks with a high asbestos content. In this project the glaucophane, a high pressure metamorphic amphibian, was classified as an asbestos mineral due to its fibre morphology.
During the excursion and several related lectures, the individual phases of the dam construction as well as the extensive protective measures for workers and the population (including numerous stations for continuous air measurement around the construction project) were explained.

The most important findings and impressions of the symposium

In some countries (USA, France, Italy, Australia) there are small-scale maps in which potentially asbestos-containing rocks can be mapped, subdivided into up to 4 risk classes.
This is an important instrument for the risk assessment of infrastructural measures such as road, railway, tunnel and waterway construction and, to my knowledge, does not exist in Germany.

Germany seems to be the only country (TRGS 517, ... It is irrelevant whether an asbestos fibre was released from a fibrous or non-fibrous occurrence of an asbestos mineral) in which fission products of possibly non-fibrous asbestos minerals are also used for a risk assessment, which only arise when the material is subjected to mechanical stress. Possibly for good reason ... (see next point).
Other countries only consider primarily fibrous asbestos, which is distinguished from fission fragments by its morphology, including the aspect-ratio (length-diameter ratio).

Dangerousness of cleavage fragments of fibres

Vigliaturo Ruggero, University of Pennsylvania, will present the results of a study that shows that fission fragments of amphibol asbestos (anthophyllite, grunerite, amosite) are absorbed by cells in the presence of long fibrous asbestos, biochemically surround themselves with an iron (oxide) layer and encapsulate and trigger lung and mesothelial diseases.

Analytical methods for the quantification of asbestos

For example, some countries have only recently started dealing with the asbestos problem of road surfaces or other products made of potentially asbestos-containing rocks (France since 2013) and some have no national guidelines for quantifying asbestos in such products.
In other countries, the asbestos problem has been intensively addressed in major projects such as the Calaveras Dam Replacemment Project in California, the construction of a largely underground bypass around Genoa or the construction of a railway line in South Korea.
In any case, the methods for quantifying asbestos are inconsistent and lead to different results (see also the following point).

Interlaboratory tests for the quantification of low mass contents of asbestos ...

... in natural or technical materials at present only the Health and Safety Laboratories, HSL, Great Britain seem to offer with their LACS program - low asbestos content scheme - (results of some discussions).
As far as can be ascertained, there are, if any, only ring trial projects for technical products with qualitative results.
The informative value of the LACS series suffered in the first four rounds from the fact that the results of different analysis methods TEM, SEM, PLM and investigation guidelines such as ISO 22262-2 and BIA/IFA 7487 were lumped together and not considered separately. It remains to be hoped that this will change with the current Round 5.