Determination of HBCD in insulating materials built of polystyrene

In Germany, insulating materials made from polystyrene (PS) – Styrofoam with a content of HBCD higher than 1000 ppm are classified as hazardous waste since the 30th of September 2016 according to so-called POP-regulation, part of the Stockholm convention list and the German Waste Catalogue, Abfallverzeichnisverordnung, AVV.

Our services for you: 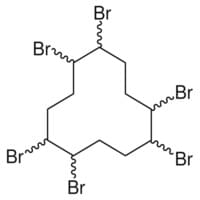 HBCD or HBCDD (Hexabromcyclododecan, C12H18Br6) is a brominated flame retardant which was used for textiles and upholstered furniture. Its primary application was in extruded - XPS - or expanded - EPS - polystyrene foam that was used as thermal insulation.

Toxicity of HBCD and its harm to enviroment

HBCD is harmful to the environment because it is persistent and at the same time it accumulates in organism, i.e. it is bio-accumulative and has repro-toxic properties. It is ranked among the persistant organic pollutants, the so-called POPs.

Because of these properties the EC has already included it into the SVHC list, Substances of Very High Concern within the Registration, Evaluation,  Authorisation and Restriction of Chemicals framework.  In 2011 it was listed in REACH and is now subject to authorisation. In 2013 the substance was ranked worldwide as a Persistent Organic Pollutant according to the Stockholm convention.  Since November 2014 there is a worldwide ban on its production and use.

Classification according to waste regulations

According to the POP regulation – EC No 850/2004, article 7 (2), all wastes that contain persistant organic pollutants must be disposed of in the sense that their POP content must be destroyed or irreversibly transformed.

Due to start-up difficulties in implementing this regulation the Bundesrat -German Federal Council- issued a moratorium in its meeting on 16 December 2016 on the disposal of HBCD- containing insulating materials as hazardous waste. This nationwide moratorium temporarily suspends the regulation of September 2016 for a whole year. Consequently HBCD-containing wastes can be disposed of as non-hazardous wastes from January to December 2017.
Independent thereof an environmentally suitable disposal in incineration plants must be further guaranteed.
Source: Niedersächsisches Ministerium für Umwelt, Energie und Klimaschutz

Old polystyrene insulating materials typically have HDCD contents of between 0.7% and 1.5 % and are clearly above the concentration limit of 1000 ppm (0.1%).

Since September, 30th 2016 HBCDs are classified as hazardous and require verification. Moreover they must be treated in authorised waste incineration plants.

According to German Waste Catalogue Ordinance HBCD containing waste of thermal insulators is therefore assigned to waste classification code number “17 06 03* other thermal insulators that consist of or contain hazardous substances” as of September, 30th 2016.

Testing for the presence of HBCD

We are working on the implementation of this analytic procedure and will offer it shortly.

Standards and guidelines for the analysis of HBCD in polystyrene